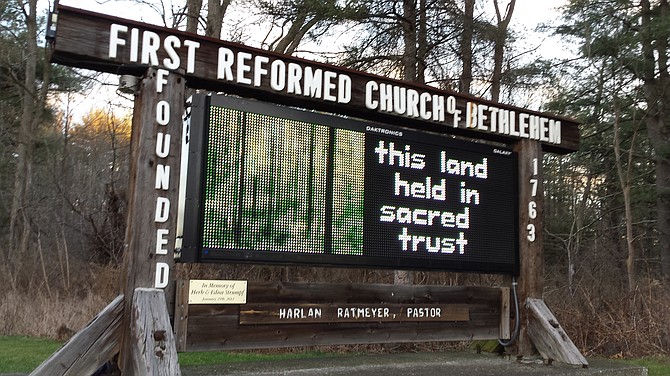 Several officials from state, county and town governments were in attendance. Some listening in. Some speaking out. Photo by Michael Hallisey.

BETHLEHEM — Local officials have taken up the fight against Kinder Morgan’s plan to run a fracked gas pipeline through town.

All members of Bethlehem Town Board plus Albany County Legislators Bill Reinhardt, Mike Mackey and Joanne Cunningham*, as well as New York Senator Neil Breslin attended a meeting in support of the group Stop New York Fracked Gas Pipeline (SNYFGP) in their efforts to stop a pipeline proposed to run through Bethlehem.

On Saturday, Jan. 23, at 2 p.m. at the First Reformed Church of Bethlehem on Church Road in Selkirk, the officials lent their voice to the issue.

“We’ve heard your concerns and share your larger concerns on fracked gaslines and the incursion on land,” said Supervisor John Clarkson. Though Clarkson admitted he and the Town Board’s legal powers are “no greater than any of yours,” he promised to advocate for measures to be taken at the state level to prevent the new pipeline.

Parts of North Bethlehem and Selkirk as well as New Scotland and Berne will be directly impacted as the proposed pipeline travels 148 miles through New York to transport gas fracked in Pennsylvania to Massachusetts. Future action meetings are planned to be held at the First Reformed Church of Bethlehem, where church leaders have become advocates against the pipeline, as it is proposed to run through church land bordering their cemetery.

“We have existed on this land for over 220 years. This is a place of peace and sanctuary and we would not see that destroyed,” said Deb Weisheit, a member of the church’s governing board, to the large crowd that came out for the meeting.

In 2014, New York State under Governor Andrew Cuomo succeeded in passing a law banning fracking, a process where gas is extracted from shale beneath the Earth’s surface to be converted to oil, from occurring in-state. Yet, the transport of fracked gas is not outlawed in New York, and as the pipeline transverses multiple states, the decision on whether the pipeline will be approved is left to a federal review board, the Federal Energy Regulatory Commission (FERC).

According to Kinder Morgan, the largest pipeline company in the country, the 30-inch, 350-mile high-pressure pipeline will reduce oil costs in New England, while delivering “clean, environmentally friendly energy sourced domestically.” The company points to their track record of having no past gas explosions – a fear of those opposed – as a measure of their reliability. As well, gaslines have existed in New York since the early 1950s, and this new pipeline, a massive undertaking that spans five states, sees some of these older lines updated, as well as new routes added.

Those opposed, including a recent Harvard University study, which found two to three times the state-approved levels of methane gas are being inadvertently admitted during fracking, say the chemicals produced as a byproduct of the process are harmful to citizen health, including increased rates of cancer, and to the environment, exacerbating the effects of global warming.

While the company only applied to the FERC in September, they plan to begin construction of the pipeline next year, and have it completed by 2018. Neighbors say this fast start date has led Kinder Morgan to illegally send surveyors to trespass on land the pipeline is proposed to run through. At the meeting, several spoke of their stories of such instances.

Leslie Corey, a resident of the town of Nassua, N.Y., told of two instances, one months ago and one more recently where a surveyor as well as a security person claiming to be a police officer entered her property after she told them several times that they did not have permission to be there and surveyed her land.

“They showed me a tablet showing that they had permission to be there,” she explained, describing the surveyors as two men with machetes. “Get out your deed and make sure you know your property lines. Even if you have given permission for them to be there, you can rescind that by filling out some forms,” she instructed.

“It is suggested that you call the police, take photographs of everything. That will help you when you make your police report.” The attorney general is currently investigating instances such as these, but Kinder Morgan has denied similar claims in the past.

Larry LeSage, a resident of a neighboring development in Selkirk, said he experienced a similar incident. Surveyors came, then trees were cut down by National Grid. “From what I’m seeing, [the pipeline] looks like a done deal,” he said. SNYFGP members suspect Kinder Morgan has struck a deal with National Grid to perform these clearings in time for pipeline construction under the guise of routine maintenance of their power lines.

Clarence Banks, a neighbor of Bethlehem Reformed Church, warned of the potential hazard incurred should the pipeline’s gas escape and infect town’s water supply. “Once contamination gets in, that water is going to go to the whole town,” he said. A recently-passed water protection Well Water Act requires companies like Kinder Morgan to test water supply before and after blasting, and if contamination is found, provide an alternative water source until the problem is resolved. This bill was passed in Albany County, Schenectady County and in Rensselaer County, where the fight against Kinder Morgan’s new pipeline has been waging for several months now.

Additionally, Albany County has passed a measure asking the state to move to halt gas transport until a health assessment can be completed. A 401 water quality certificate must also be passed by the state and SNYFGP is urging the governor to not give this to Kinder Morgan.

“As Albany County Executive, I believe that one of my most important responsibilities is protecting the health of the residents of Albany County,” said Albany County Executive Dan McCoy. “That is why last month I joined advocates and experts at the capitol to call on the state to conduct a comprehensive study on the potential health impacts of this project.”

“In the past the governor has called upon the expertise of experts to conduct thorough research on the issue of fracking. It was based on that research and study that the state banned fracking in New York State. Now, we have another potential issue that could lead to health and safety implications and we need to make sure this issue is thoroughly studied before any decision is made. We can’t be certain that current standards adequately protect public health and safety—our number one priority. That is why I am opposed to any natural gas infrastructure projects until formal, independently conducted, comprehensive health impact assessments are done.”

“A state that banned fracking should not be allowing its transport,” said Becky Meier, co-founder of SNYFGP. “I urge you to send letters to your public officials asking for the reform of the FERC and for a moratorium on fracked gas transport from Cuomo.”